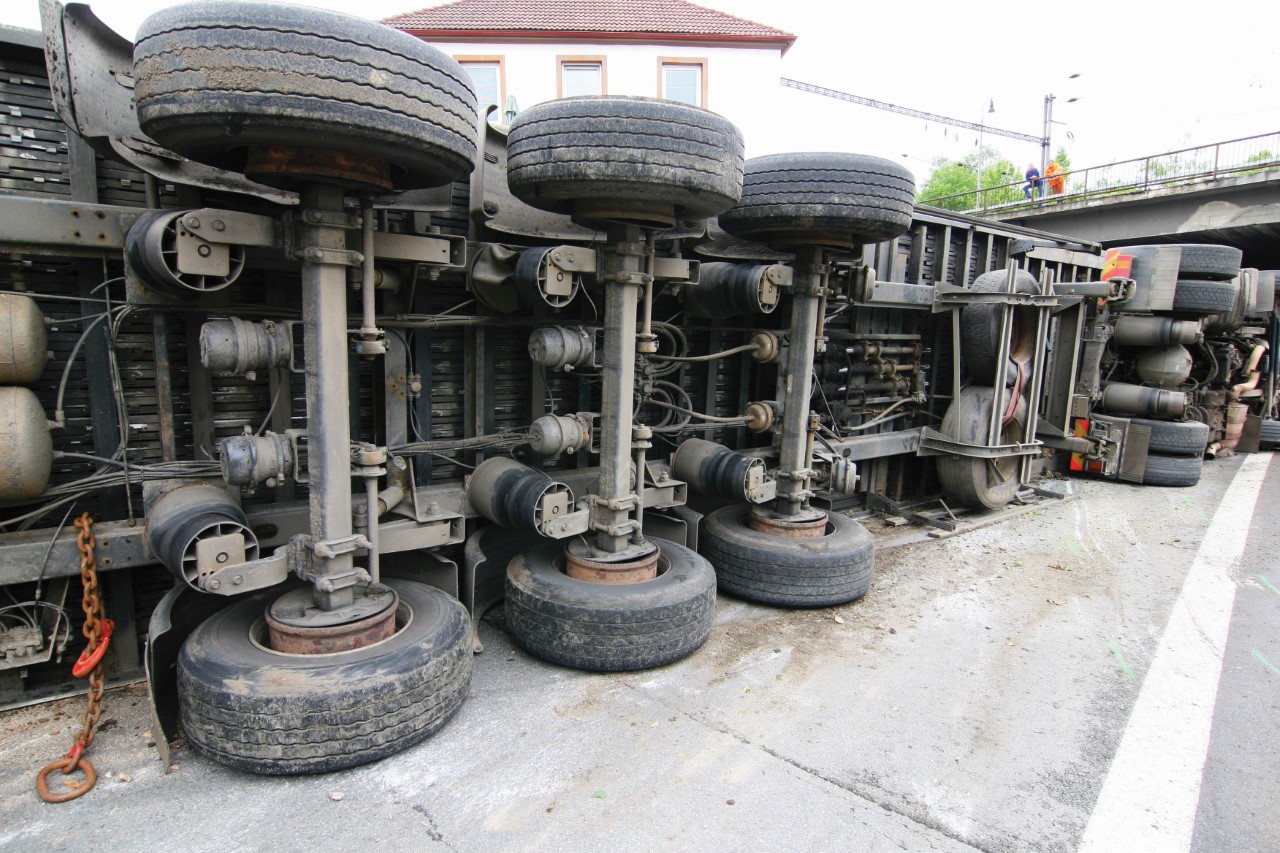 As I sit and type this, Storm Doris is making her way across the UK bringing – we’re told – snow and gales in her wake. At the moment it’s just sunny and a bit breezy here, but I’m still glad I’m not sitting on the docks wondering what I might be driving off into and whether they will still be open when I come back later with an empty container.

One thing I wouldn’t have been worrying about, however, is whether I’d have to park up and sit out the worst of the weather somewhere – and that’s because, as an industry, we have a really unhealthy attitude towards wind in this country. In my last driving job, you’d have been forgiven for thinking that a refusal to do anything other than keep on going through even small-scale hurricanes was a macho thing, but it wasn’t – it was fear.

That’s no exaggeration by the way. In October 2013, I clearly remember driving across the Pennines on the M62 with a 40ft box on, hanging on for grim death while watching the matrix signs flash with instructions for all HGVs to leave the motorway at the next exit.

As far as I’m aware, not a single one of our fleet obeyed – I know I didn’t. Nor was there any sign of a mass exodus of wagons at any of the junctions I passed. The reason was simple – we were all utter cowards and fools, more scared of getting an earful from our Transport Manager telling us no-one else had pulled over than we were of the weather.

So what’s it like actually being blown over? Regular CV Driver readers may remember Chris Wootton, one of the guys in our feature about recovering from big accidents back in spring last year. Chris rolled over up in Scotland just before Christmas 2012.

He said: “I was pulling an empty curtainsider when it happened. We weren’t allowed to open the curtains up on that job because the trailers hadn’t got posts in, so obviously the roofs were vulnerable to being blown off. “I was running up to near Perth from Bellshill in the dark and was just coming round the sliproad onto the M80 when I felt something wasn’t right. I wasn’t sure what it was, just that something had “gone”, but then it settled itself down so I kept going.”

Everything was fine for a while until Chris got to an open stretch near Stirling. “There was a big gust of wind and it started to go, then it went down again so I slowed down a bit and just sort of gripped onto the steering wheel harder,” he continued. “But then it started to go again, the horizon got to about 45 degrees and it finally went down on its side.”

The truck kept going for a while, sliding down the road on its side at around 45mph, dragging Chris’s arm with it. “Everything happened so quickly that, literally as I was going down the road, I was trying to keep myself away from the window because it

was smashed and the mirror broke and there were all sorts of my belongings and bits and pieces in the window too.”

Eventually he managed to pull the limb clear and the vehicle came to a halt, but then a whole new terror kicked in. “All I could think about was whether it had gone over the crash barrier and I was going to get hit head-on by an oncoming car that couldn’t see me in the dark,” he recalls, shuddering at the memory.

“That was all I could think about because I didn’t know whether or not I’d crossed the central reservation. I was just sat there – I couldn’t move because the seat had gone right up on its air spring as well – waiting for someone to drive into the front of me. That was probably the scariest part of the whole thing, really.”

Thankfully it turned out Chris was still on his own side of the two-lane motorway, but he had no way of seeing or knowing that at the time. “The other thing I remember was having the lid of something between my ankles and not being able to get rid of it” Chris tells us.

“I don’t know what had happened or what it was, but the door had come in towards me and I just couldn’t move, so this lid was driving me mad. Then a load of people came along, a bloke climbed on the passenger window and someone started smashing the windscreen.”

Eventually the emergency services cut the steering wheel out and lifted Chris into an ambulance. They took him to hospital where he was found to have shattered his pelvis, an injury which took several months to fix and which still causes him problems to this day.

Mentally Chris has come through pretty well, though he does have his moments. “It is still there,” he admits, “especially when it’s blowing a gale and I’m a bit twitchy.” The thing is, how exactly do you decide when it’s reached the point of being “too windy”? And is “too windy” for some vehicles and loads – or lack of it – perfectly fine for others?

Damien Rogers is a car transporter man of many years experience. He said: “People think we’re OK with these because the wind goes straight through the gap between the cars, but it doesn’t. “Even with a part-load on it they’re about as aerodynamic as a block of flats, which is why you see them swaying about so much. Charlie Cane says:

“I reckon all it takes is a gust at the wrong time and place with an empty tandem. There’s a stretch of the M6 between Westmorland Services and the truckstop at junction 37 where they go over regularly – the most I’ve seen was one southbound and three northbound on the same night, all within less than a mile.”

Simon Peters lost a colleague on that very section. “One of our lads was killed in a blowover incident a few years ago,” he says.

“He was running with another of our drivers who was 100 yards behind when it happened, powerless to do anything other than watch. The second guy has PTSD (Post Traumatic Stress Disorder) to this day from seeing it.”

In mid-January this year a Currie European driver attempted to cross the Forth Road Bridge when the diversion signs were flashing and ended up stuck on his side across both carriageways, shutting the road – the main route north into Fife and beyond – for nearly 24 hours.

The 54-year-old driver was charged with dangerous driving and verbally ripped to shreds on truck driving forums and social media alike for causing chaos by taking a chance, but I can’t help wondering how many of those chucking stones are actually doing so from glass houses. How many of us northerly-based types have quietly motored over a supposedly closed A66 between Bowes and Brough on the grounds that “I’m not going to go over with 26 tonnes in the back”? Guilty. How many of us have laughed at newcomers to the area unhappy to join in our jolly jape? Guilty. How many of us have jeered over the CB at friends who’ve had to go the long way round over the A69, hit all the traffic on the Newcastle western bypass as a result and ended up running in out of hours just as we’re running out to earn more money and the night out? Guilty.

How many of us have listened to the radio and heard about wagons being blown over on that and similar routes, in similar circumstances, because drivers just like us took exactly the same chances we did but not been quite so lucky? Suddenly the whole thing isn’t such a good laugh after all.

I speak to a lot of operators these days and many of those running double-deckers or carrying very light cargo are far more proactive than they ever used to be about getting their drivers to stop when the wind blows, but we still have a very long way to go if we’re to educate the masses. In the time it’s taken me to write this article, the weather has changed.

Doris has arrived and she’s blowing a hooley. I’d like to think that with this evening’s forecast I’d be taking my freshly collected container back to the yard and informing my gaffer it can go in the morning, but I know I wouldn’t because no-one else would, and that’s where the biggest problem lies. No-one wants to be the first to refuse – and as long as no-one is the first, there won’t be a second, fourth or tenth refusal to go out and risk life and limb for 25 tonnes of cat food either. Perhaps it’s time we all got ourselves a sense of perspective.