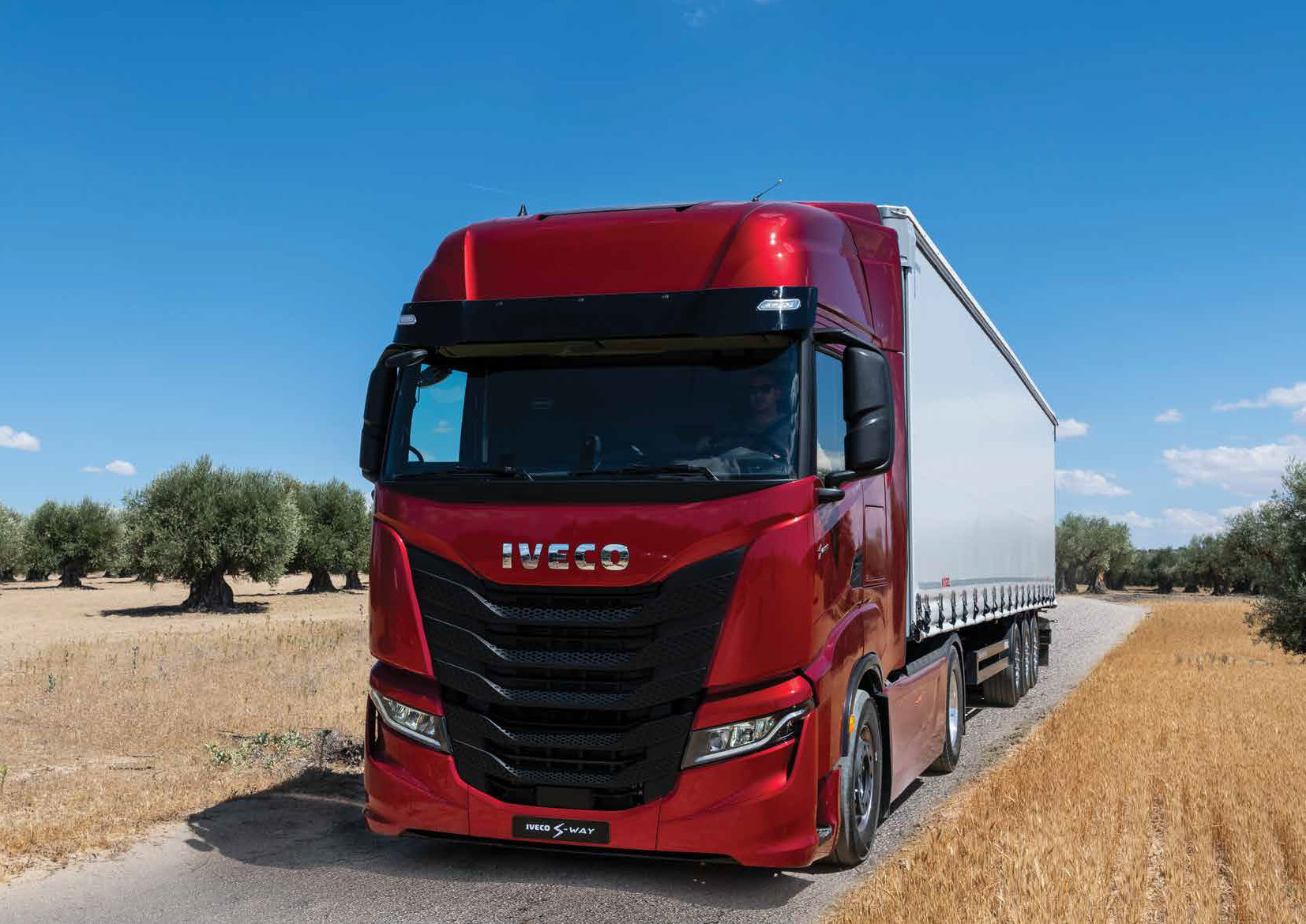 After a year or more of tantalising image leaks on the internet, the new Iveco heavy truck range – due to replace the Stralis models – has been unveiled to the press, dealers and staff at an event in Madrid.
The new truck is called the S-WAY, with the additional X-WAY for those who want a heavier duty chassis aimed at the construction market. These models will be followed by the T-WAY as a direct replacement for the Trakker range later this year. The truck unveiled was the full width, top of the range cab, but a narrower 2.3m cab is also expected soon.
It’s not a completely new model as the S-WAY uses the existing driveline from current Stralis range. But, as Iveco points out, that variant was introduced only three years ago and, indeed, the new cab is the last piece of the jigsaw so far as its fleet replacement is concerned. The company admitted it is not sensible to bring an entirely new truck to market – engines, drivelines and cab – in one go these days. 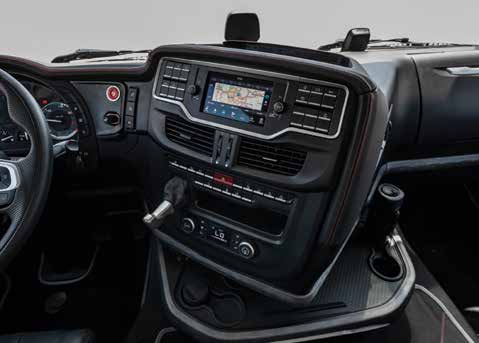 The new S-WAY cab is certainly striking. The styling – which Iveco says will give it up to 4% fuel saving – is certainly a match for a Scania or a Volvo in terms of looks.
Iveco has gone down the route of making the cabs better for drivers because it knows that if it is going to win market share, then cab space is a priority. Inside, there is more space for the driver’s belongings as well as two fridge/freezer units under the main bunk. The seat base has been reduced in height, allowing the seat cushion to be made thicker for added comfort. The high roof extension has been dramatically changed to give more room inside, the raked profile of the old roof has been changed for a ‘boxier’ look and there is now an internal height of 215cm. The bunk-side controls are now in the middle and drivers can also lock or unlock the truck from their bunk.
There are two upper bunk options, depending on whether it is to be used regularly or occasionally. The bigger and comfier bunk is 70cm wide and 10cm thick, while the occasional use/shelf version is 60cm wide and 8cm thick. The upper bunk has two catches to press to allow it to lower horizontally. The volume of the cupboards has been increased to 270 litres, 20% more than the outgoing Stralis. There are also two side pockets on each side of the enlarged roof section and a larger roof hatch.
As well as improved lighting, there is an optional pull-out table on the passenger side for the driver to use for eating or to support a laptop while parked. More buttons are now located on the steering wheel to allow the driver to keep their hands on the wheel while using them. An electronic key with a stop start button is also new. There is also the benefit of a new Safety Lock for added security from intruders.
The new S-WAY has a 7in infotainment touchscreen unit with DAB radio and the speakers have been repositioned to for the benefit of the driver.
The cab doors have been extended to cover two of the three steps to save fuel and give better security. There are up to four external lockers, which give a total capacity of 375 litres. The top lockers can also be accessed from inside.
Improved light clusters incorporate the LED headlights, indicators, running lights and fog lamps. The lights have a sharper beam that carries further, improving visibility.

As mentioned, the drivetrains and engine options are those currently used on the outgoing Stralis models, updated as recently as 2016. That meant there are three engine sizes – the Cursor 9-, 11- and 13-litre options giving a range from 310 to 570hp.
That breaks down as 310, 330, 360 and 400hp outputs from the 9-litre engines, 420, 460 and 480hp from the 11-litre and 510 or 570hp from the 13-litre. There are also the Gas versions at 400 and 460hp, which Iveco expects will grow in popularity over the next few years.
The gearboxes remain the Hitronix and there is expected to still be a manual option. There is a five-stage engine brake. 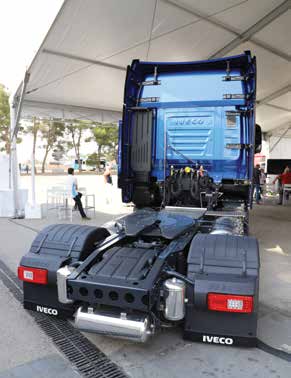 The new trucks are now being built in the old Pegaso factory in Madrid with long haul trucks with the wider cabs first off the production line. The old Stralis will continue in production until at least October.
Sadly for UK operators, the right-hand drive variants won’t start production until April 2020. The narrow cab trucks start production next year along with the T-WAY range.
Iveco is not claiming any weight reduction with the new trucks and while the prices are likely to rise by 5%, Iveco says better fuel savings and lower TCO will offset that.

We drove two of the new trucks for a couple of laps of a racetrack to offer an insight into their appeal from the driver’s seat. The S-WAY 460NP was first followed by the 480 diesel. Access is via three steps and pretty easy.
The rattles – so long a black mark on Iveco products – simply weren’t there. There are still a few questions over build quality as one of the demo models already had its fuse box cover ripped off its bolts. We hope this was just a blip and the cabs certainly feel a lot more of a premium product compared with earlier models. We thought the engine was a tad noisy, especially from the diesel variant.
The visibility and steering were both excellent. Iveco has decided not to go for the mirror-less set up, certainly not at the launch, but the ‘old school’ rear view from the mirrors was very good.
Being restricted to just a short drive on a racetrack with lots of bends meant we couldn’t get a real feel for how good a truck this will handle, but early signs are Iveco could have a good product on its hands. It is a definite improvement on its old Stralis predecessor. 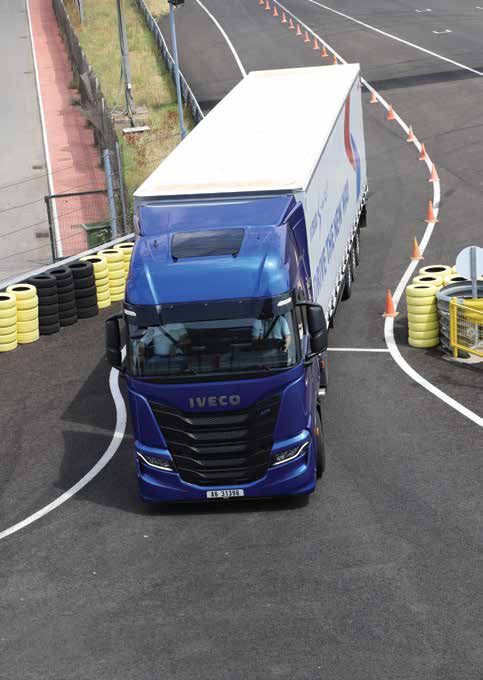 It’s fair to say that Iveco will be out to take on DAF, Renault and MAN in winning market share. Obviously it won’t turn down Mercedes-Benz, Volvo and Scania operators, but they are in a different league in terms of price and, probably, quality. As regards TCO even against the premium brands, however, that might start to swing more in favour of Iveco.
Iveco has always been well-priced and that is a big plus point for the range. The dealer network is smaller compared with others and those dealers will have to support the trucks properly.
The S-WAY is fine truck and has a lot to offer. It has style and substance. Whether it can shoot Iveco up the market share league table remains to be seen, but this is a truck any serious operator ought to have a good look at – and even an extended trial.