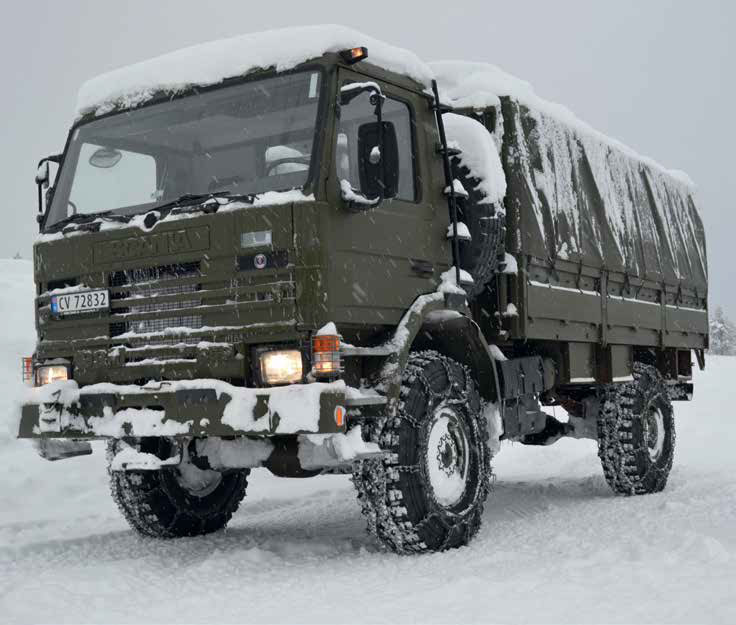 CV Driver has been to a frozen Norway to see how Scanias, including the new XT models, manage in the land of ice and snow.

The further north in the UK you live, the more likely you are to get proper snow, not the pitiful amount that falls in the south. Add a bit of altitude, such as the Peak District, or even the Scottish highlands, and the white stuff will be a regular winter visitor. We all know that driving techniques need to shift as the Mercury falls, and braking in particular needs a different approach – and the further north of the UK, the more attention is needed.

Two hours north of Oslo, Scania runs its regular winter driving press event and this year it fielded a range of 21 trucks – from the modest P220 4×2 urban distribution at 18 tonnes, up to the new S730 hill-crusher. We had a go at four of them. This is what we found.

With top gross weights in Sweden of 60 tonnes (outside special types regs), their trucks are built to haul big loads. Our first test drive was in a G500 XT 8×4 rigid, pulling a tandem axle trailer, with tipper bodywork. This was a productive and well-specced truck. Running at 50 tonnes, with 500hp, double-drive, their GRS0905R gearbox and the R4100 retarder it gave a convincing display, rolling on real ice and snow. An R580 6×4 tipper with a tri-axle trailer did as good a job. Two routes, one on a narrow track through the snow-bound forest, and another on a 5km descent and climb on icy public roads. Running at highway speeds, the public road section was exceptionally impressive. The Scania demo driver team are one of the best in the business, they know how to convey useful tips with the minimum of fuss.

On UK roads, in most weather conditions, we are used to being told to plan ahead and use the auxiliary braking systems, (exhaust brake and retarder) before you move to use the foundation brakes. It’s become a good habit. But we learned at last year’s winter driving event that you generally stay away from the retarder on icy downhill sections. Attempting to restrain an eight axle drawbar combination at 60 tonnes, on a long downhill stretch, with just a retarder – no matter how powerful – is a mug’s game. It was a 6×2 rigid up front, so you are getting no braking on seven axles, including the entire trailer. Use the retarder alone like this, and you may soon be treated to the sight of a trailer overtaking you. By the time you realise it’s yours, it’s all gone horribly wrong. We found the downhill section far more challenging than climbing back home. The top tip here is to hold the right gear, and gentle braking with the foot pedal. Which brings us to tyres.

In the same way that Marc Márquez, fourtime MotoGP world champion – and his Honda RC213V – would be nowhere but for the boffins at Bridgestone, Scania’s impressive range would have slid off the road and into the snowy woods, but for their Continental rubber. At CV Driver, we call tyres ‘Your only grip on reality’, and this event was a prefect demonstration. Having walked over part of the forest route and nearly gone A over T twice, we knew what the conditions were like. Driving 50 tonnes over it, and using the brakes to stop, was a weird experience. Yes, it was slippery, but the trucks were pulling up well. The science of block tread and sipe design, and the compounds now used, make them as hi-tech as many other drivetrain items. The fact that they wear out and get chucked away, makes them no less clever.

With our notes safely stashed away, and a little time left, we indulged ourselves with a drive in an R730 8×4/4 nine axle drawbar, with timber transport bodywork. The combination of absolute luxury and unlimited power (certainly as much as you can lay down in these conditions), all delivered in near-silence, is almost enough to make you dribble. We’ve driven this model before, as a regular highway tractor, but it’s adaptability to enter this environment without turning a hair, is impressive. On ice and snow, it’s best not to stop on an incline, unless you have no choice. We were unexpectedly held up by another truck, and had to pull up. Moving away from a standstill needed a very light foot, and we knew that the warm(ish) tyres would have melted a thin layer of snow while we had been standing, making the going very tricky. With the limited slip diff already engaged, the demo driver reached across the cab and pressed a switch that expanded the throttle pedal movement to allow more finesse with power delivery. Away we slowly rolled, switching back to normal throttle control when on the move. What a performance.

To put their new trucks in perspective, a couple of ex-military 93M 250 light 4x4s were tucked up a corner. The specimen we had a go at was from 1986. This truck was built when Peter Gabriel was wielding his sledgehammer and Robert Palmer was addicted to love, poor chap. They were running around a very off-road course, in deep snow and very deep ruts, with S&M spiked snow chains for traction. With sudden invisible potholes and kicks on the steering wheel, the advice was to set the hand throttle, engage bottom gear and let out the clutch carefully. It wasn’t until we were half way around the course, that I realised my efforts on the steering wheel were a waste of time; she was going where she wanted and the deep ruts were guiding the whole affair. I let go and sat back, laughing at it with the demo driver. What’s all this old cobblers about autonomous driving being the white heat of modern automotive technology? It’s been with us since 1986!