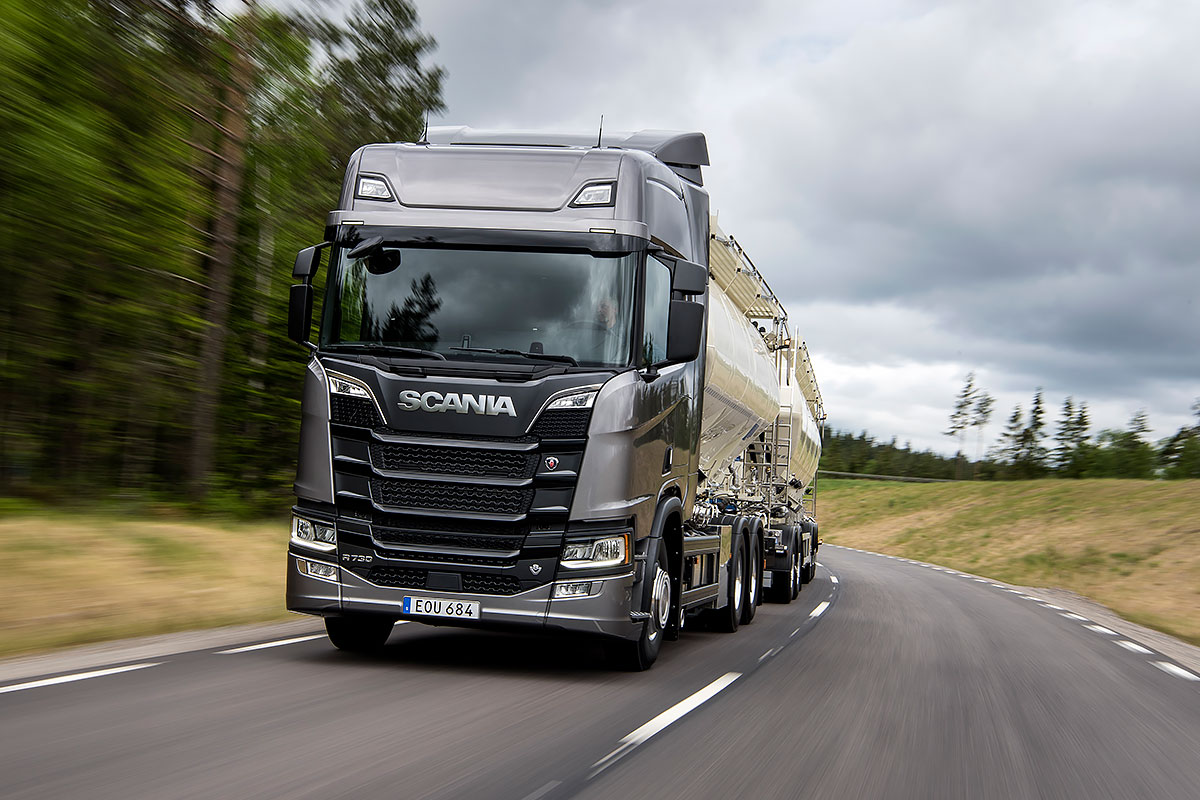 Of all the new products launched by the truck manufacturers in recent times it was Scania that was most keenly anticipated.

It did not disappoint. Sleek is the best way to describe the all-new R- and S-Series cabs. With 10million kilometres driven and £2billion spent, I eagerly flew out to Sodertalje to drive three new trucks (see box).

In the previous issue of CV Driver (Autumn 2016) I assessed the philosophy behind the new generation Scania; improved aerodynamics, better fuel economy, safer, easier to repair through its modular design…all of which pointed towards the keeping the cost of ownership down for the operator. A theme every manufacturer is focusing on.

Allocated a R450, I got my first feel of the metal. I opened the door and climbed up three steps into the driver’s seat. Rather than pull the door from its typical adjacent position I was encouraged to close it from close quarters; three inches to be exact. It closed with a subtle clunk and minimum of fuss, almost gentle like.

Inside the cab, Scania has resisted any attempt to go for the garish or gaudy; softtouch plastics are neutrally coloured with a clear emphasis on style. Thankfully for an all-new truck, the layout of the dashboard inside the outgoing models has not binned for the sake of it. It’s familiar to a fault, including the iconic handbrake lever. Retaining it, and not introducing an electronic handbrake/Hill Assist, and keeping Hill Assist apart is safer according to Scania. A decision I agree with.

Scania has moved the seating position 65mm closer to the windscreen and 20mm towards the door. It’s not unsettling but the new position will be subjective for drivers. Personally, I think relocating the seat is less comfort driven and more to create extra internal space. For that alone it’s welcome. Changing the seating position means you need to refocus your radar when driving on the road to cater for the fact the truck will be marginally closer to the nearside if you carry on as before.

The seats relocation combined with narrower A-pillars and a shallower dashboard provides a decent view of the open road, which is helped with a subtle redesign on the wind mirrors that includes making a slighter bigger gap between the mirror housing and the pillar.

Extra space around the driver’s seat is filled in part by a larger bottom bunk, which can be extended 200mm to 1,000mm at its widest point. Clearly Scania see it a lesser evil than other designs it has come up with over the years, like the self-assembly bottom bunk.

Continuing with the pull-out bunk suggests Scania values over-engineering to achieve a little additional space for the driver over a static design. Again its personal but I would reinvent the wheel; perhaps a single concertina down the length of it to stow the bunk to the back wall of the cab for expansive extra space or break it up into two parts, with two-thirds used to make a seat behind the passenger seat to relax and the other section turned into a table. Food for thought, perhaps.

I placed my water bottle in the central console, turned the ignition and got the Euro-6 12.7-litre all-SCR engine fired up. I was urged to listen carefully. Scania has paid attention to external noise pollution and made great play on the fact engine noise is reduced.

The 450hp engine is familiar – and very popular – with many UK operators. It’s fuel efficient and contains plenty of oomph. Once on the road, its performance wasn’t the focus, it was the new Opticruise transmission.

At the original launch, and at this event, various Swedes went to great lengths to explain the improvement of its transmission and the introduction of a lay shaft brake. In essence this concept synchronises the different speeds of the countershaft to make swifter changes – 45% quicker to be precise. It means not as much turbo pressure is lost and more momentum is maintained. The speed of the gear change is obvious on the level and very apparent on the first hill climb. Lewis Hamilton would be hard-pressed to make a quicker gear change. Operators will enjoy its performance.

When we got back to the truck park, we took out the S500. A flat-floor cab is more than welcome for the tramping trucker. A 10cm increase in internal height compared to out-going truck means you can wear a Tommy Cooper Fez hat in the evenings and it won’t get knocked off. The fact that there is clear synergy from the entry level cab to the range-topping S means the real difference for the driver will be down to the optional extras. Sadly, a simple S replaces the Topline tag, which is consigned to history.

Finally we took the R730 out and about. I never tire of hearing the 16.4-litre drivetrain with its V8 90-degree cylinder alignment growl before setting off or feeling its power, especially even hauling 60 tonnes GVW, as it digs in.

As the driving event neared its end, word came through that demonstration vehicles were already available in the UK for operators to try. I would urge you to do so if only to experience it and put it into context.

There was a lot of pressure on the Swedes to deliver something that would make the likes of us tired hacks and ex-drivers stand up and take notice. Scania has achieved that. Opticruise transmission is now arguably a class-leading product, the flat-floor is back, the cab oozes quality, it’s quieter and underneath the all-new cabs are strong, responsive engines. That is no mean achievement.

Many feel Scania took an evolutionary approach – code for tinkering around the edges and putting funky new badges on revamped grilles. In truth the Swedes revolutionised its truck range in two stages; first came the Euro-6 driveline in 2013, and now the cabs. Job done.