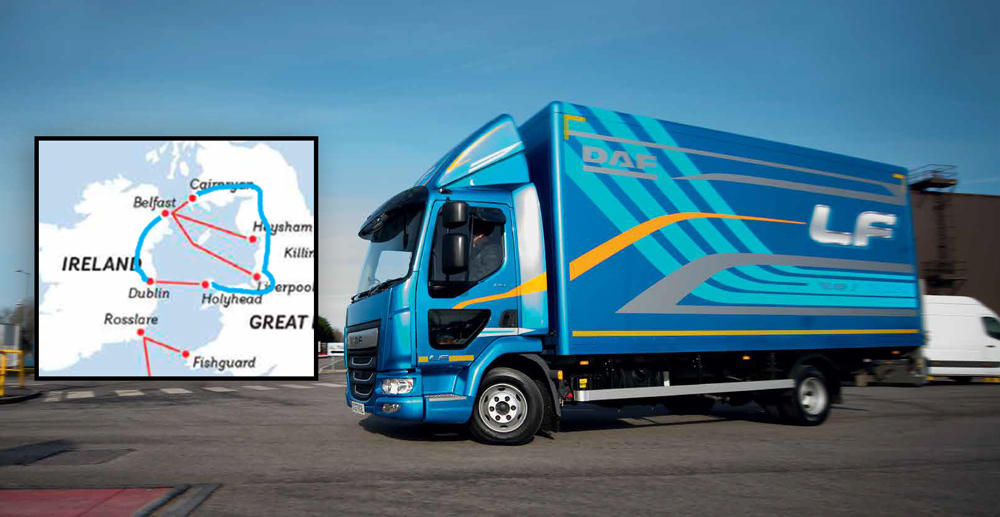 Five nations, two ferry crossings and 620 miles. CV Driver Magazine takes it all on in an exclusive drive in the all new DAF LF City, with a very special load on board 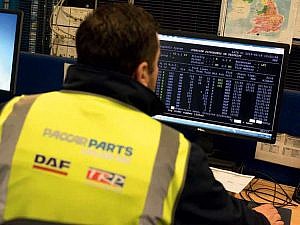 So here’s the deal: PACCAR Parts delivers spare components to every dealer in the UK and Ireland and, as part of its VOR (Vehicle Off Road) scheme, parts ordered before 6pm will be in the dealership before 8am the following morning. This service is offered to all dealers, regardless of location, which got us thinking. As CV Driver Magazine had been offered the first drive in the all-new LF City (DAF’s interpretation of the ultimate urban distribution vehicle), what better way to put the feisty little truck through its delivery paces by trying to beat PACCAR Parts’ slick logistics process? To make it more interesting, we decided we needed to look at a number of more tricky locations to get to and throw in a wild card – a ferry crossing.

On paper it all sounds relatively straightforward but planning to cover England, Scotland, Northern Ireland, the Republic of Ireland, Wales and finally back to England needed some accurate planning – and although running with two drivers would need an overnight break of nine hours. The initial destination was TBF Thompson DAF in Mallusk on the outskirts of Belfast by way of Cairnryan, before heading south to reach DAF’s Dublin dealer before noon. Then we would head to Dublin Port for the crossing back to Holyhead and eventually where we started: PACCAR Parts in Leyland.

Day 1: 12.30 The PACCAR Parts team loaded the LF City swiftly with a selection of pallets and with the paperwork checked it was time to head up the road. We headed up the M6. The regular PACCAR Parts truck which is operated by Maxi Haulage, would be heading south some five and a half hours later to the distribution hub in Warrington, where the load was split, the Northern Ireland-bound load going onto another trailer before heading north and on to Cairnryan for the crossing to Larne.

The LF City soon was into its stride and, although the truck is designed to be put to work in an urban distribution role, it was more than happy sitting at its cruising speed of 52mph – the rev counter needle firmly in the green zone. Admittedly we were a bit too keen to get away from the PACCAR Parts Distribution Centre in Leyland and forgot the basics such as nipping to the loo! So the signs on the motorway counting down the miles to Lancaster services were a very welcome sight. We made the pit stop and departed with a bag of crisps and a bottle of pop in hand.

The next planned stop was the Stena Line ferry terminal at the port of Cairnryan. The LF ate up the miles along the M6, passing the picturesque scenery of Cumbria, and it wasn’t too long before we were passing Gretna Green and indicating to leave the motorway. We then picked up the A75 for the 100-mile, 40mph limit schlep to Stranraer before heading up the side of the loch to Cairnryan.

Cruising through the countryside of Dumfrieshire and making good time, we decided to brim the 110-litre fuel tank at the next available services – if all went to plan this should see us all the way through both Northern Ireland the Republic, as well as back through North Wales on the return route the following day. Tank filled – and more crisps consumed – it was back on the A75 for the tedious drag to the port.

Pulling up to the port

Day 1: 17.33 Arriving at Cairnryan port some five hours after leaving PACCAR Parts, the Stena Superfast was just docking as we pulled to a stop in lane nine. Waved forward to board – and once clear of the link-span, the LF was consumed into the belly of the Stena Superfast VIII, with the added bonus of parking right at the front of the lane, which meant upon our arrival in Belfast, the LF would be one of the first trucks off the ferry. With the LF locked and checked, we headed straight upstairs to the dedicated drivers’ lounge for some ‘proper fodder’: freshly cooked – and very popular – fish and chips.

Day 1: 19.30 The Stena Superfast VIII slipped her mooring on time and with a crossing time of just over two hours, by the time you’ve had a meal and a wander around, it’s not too long before the call comes for all drivers to return to their vehicles. Docking exactly on time and being one of the first vehicles off must have given us an advantage over the dedicated parts delivery truck. But all we knew was that it had left PACCAR Parts bang on schedule and had, in turn, arrived at the distribution centre on time for the Belfast load to be trans-shipped.

We knew the truck would be using the P&O service, which docks in Larne, but couldn’t find out if the service was running to schedule. A quick phone call gave us a glimmer of hope – when the vehicle leaves the ship it heads straight to Mallusk where the load is split and the PACCAR Parts loaded onto an 18-tonner for the final stage of the journey. All we had to do was drive to TBF Thompson and arrive before 8am.

Parking up for the night stop, and to add even more pressure, we needed to take a nine-hour break even with two drivers. The way the route had been planned and with the timings of the crossing we had no choice but to stop. As the LF City is a true distribution vehicle, it doesn’t have a sleeper cab so overnight accommodation had to be booked. On paper we were nine hours ahead of the truck heading from Warrington with the before 8am delivery. Taking the full nine hours meant the LF City couldn’t be moved before 7.40am the following day. What should have been a reasonably straightforward head-to-head challenge was now becoming very competitive – a real life logistics case of the hare and the tortoise. All that could be done was to check in, enjoy a cold beer and go to bed on the understanding that the LF City had to roll at exactly 7.40am for the short run to TBF Thompson. A quick breakfast and straight out to the vehicle, after the walk round it was tacho cards in and ready to move exactly nine hours after the vehicle was brought to a halt.

Day 2: 07.40 As the time was just 20 minutes ahead of the scheduled 8am VOR delivery commitment, it was going to be tight. We headed onto the industrial estate and into the DAF dealership. We followed a number of trucks, one of which we jokingly commented: “Wouldn’t it be funny if that’s the parts truck?” As we approached TBF Thompson, the truck indicated to turn through its gates at exactly 7.50am. We followed and it turns out the joke was on us – the parts that had left Leyland some 13 and a half hours previously and had beaten us with 10 minutes to spare!

Day 2: 08.35 The pallets were taken off, a few pictures were snapped for posterity and there was one challenge still left to achieve – to arrive at DAF Distributors Ireland (DDI) before lunch. The morning was cold, crisp and clear and the LF powered around the city of Belfast then headed south and picked up the M1 to Dublin before joining the M50 by the airport and finally N7 towards Naas and the new showcase DDI dealership. With mist clinging to the mountains and bright sunshine, the conditions really did make for great scenery as we got closer to Dublin. It also gave us time to reflect on the LF City experience in more detail.

With the truck designed predominantly for urban distribution, both access and visibility are excellent. The interior finish is practical and well-thought-out and even though the designers are working within the confines of a small space by comparison to the LF’s larger brethren, they have done a really good job.

The charcoal grey seat coverings look as though they will take the punishment of multidrop delivery and a handy feature is the additional storage space under the passenger seat, accessed by lifting the seat base. The void easily consumed by outdoor coats and a couple of small bags.

What did become apparent – in particular on some of the more built-up and traffic heavy parts of the journey – was that there wasn’t any need to shift up and down the gears in the mid-range either third down to second or third up to fourth where the bulk of gear shifts will take place on urban work.

The reason behind this is the longer third gear that will allow the PX-4 to work as low down as 800rpm in the sub 20mph region. Keeping with the dedicated urban distribution specification, the 6.1m GRP box complete with Del column tail lift, are all fitted at the Leyland plant as part of the vehicle manufacturing process. Obviously, operators can work with their supplying dealer on a local level for more bespoke bodywork solutions.

As we approached Dublin, the amount of traffic increased and it was bumper-to-bumper as we neared the N7.

Day 2: 11.27 A few minutes before 11.30am and definitely before lunch, we rolled to a stop at the gates of DDI, only to find that the VOR overnight delivery had arrived on schedule, unloaded and had left three hours before.

After taking a few more pictures, we thought the challenge was over – the booked ferry crossing would have got us into Holyhead from Dublin at midnight. A quick online check revealed there was an afternoon crossing that would get us back to Holyhead early evening, arriving at PACCAR Parts for 10pm.

Needless to say, we made haste to the port and those kind people at Stena Line found room for the LF City and its crew of two. The luck of the Irish must have been with us because when we drove aboard the ferry, we were waved right to the front of the deck. We went one better than the previous journey, as ours was the first vehicle off when the Stena Superfast X docked in Holyhead!

In order to set this challenge up, it required two drivers available with enough duty time to cover the route. We needed to arrange a load and then the subsequent loading of the LF before the route could be properly planned and arrival time calculated. Stena Line was consulted and offered us the best crossings they could to help match our timings – and we STILL couldn’t be first through the gates of TBF Thompson or DDI. So, in conclusion, what CV Driver Magazine saw as a real challenge and pushing the delivery and logistics envelope, PACCAR Parts do nightly without fuss! 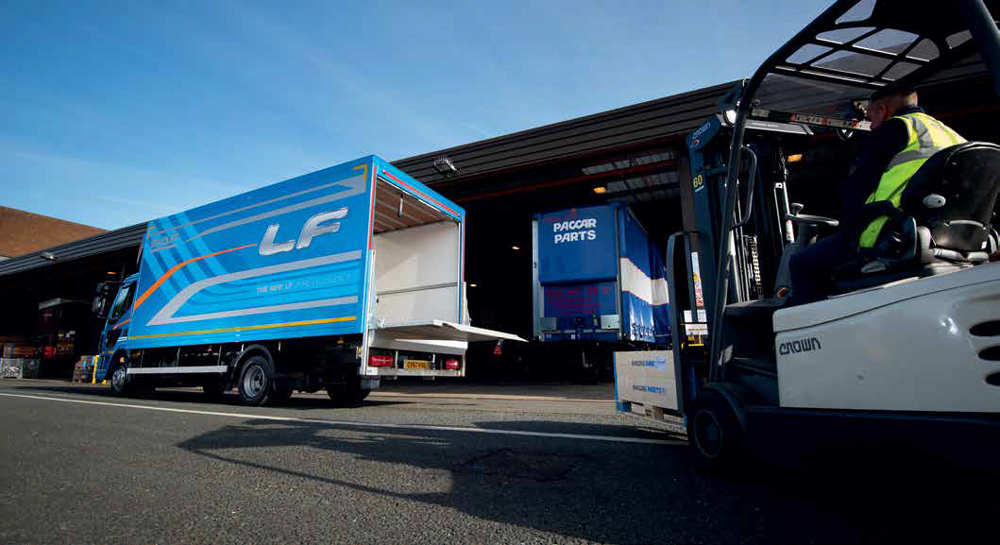 The all new DAF LF City

The LF City DAF has played a crafty card with the LF City, engineered as a dedicated solution to urban delivery. Powered by a the 3.8-litre four pot PX-4 with a choice of 156 or 172bhp. The New LF City is the first engine in the line-up to forego exhaust gas recirculation (EGR) and rely solely on selective catalytic reduction (SCR) to meet Euro 6 emission levels. Out goes the automated gearbox and in comes the Eaton five-speed manual – a box that is far better suited to stop-start traffic. Another welcome addition is the vision door on the passenger side, which is designed to give a better view of pedestrians and cyclists. So why launch an entry-level product into the market saturated with competition and lighter cab-over options from Asian manufacturers? While its kerbweight – 3,234kg for the chassis cab – inches it closer to the sector’s lighter cab-forward trucks built by Mitsubishi, Isuzu Trucks and Toyota, likelier customers will be through established relationships. 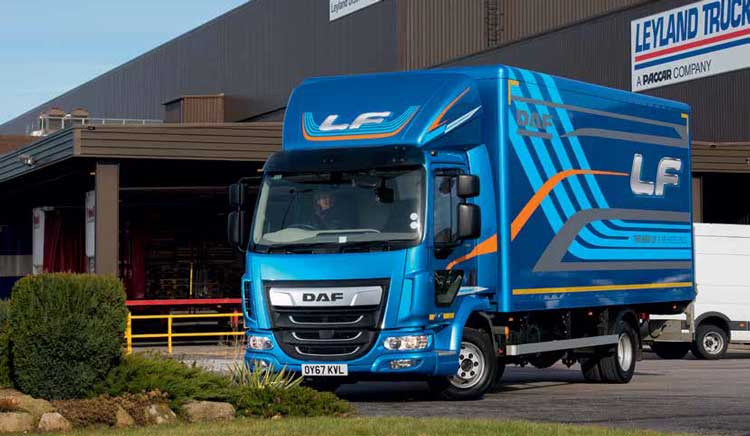 The all New DAF LF CITY