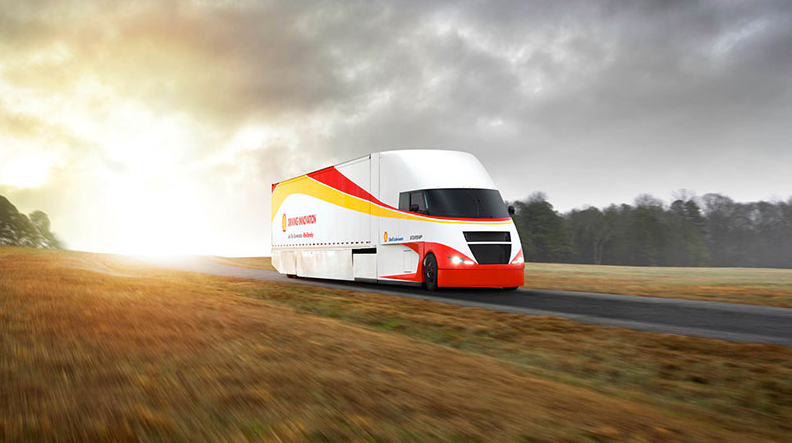 When concept-truck builder Bob Sliwa pulled off Interstate 10 to arrive in Jacksonville, Florida after completing a coast-to-coast drive of the USA, he didn’t quite know it yet, but he was potentially transforming the industry conversation around fuel efficiency irreversibly.

For those companies whose business and performance depends on a heavy-duty fleet, success relies on identifying the factors that are reducing efficiency and then effectively targeting them, such as in the case of the Starship Project. These could include vehicle drag – both wind resistance and rolling resistance – which slows a vehicle down and reduces efficiency. To combat this, the Starship truck used a 100% carbon fibre cab with a streamlined and aerodynamic shape to help cut wind resistance. A gap closure system, boat tails off the back of the trailer, and full-length side skirts were also implemented to reduce wind resistance. Meanwhile, an automated system sensed when tyre pressure was low, then self-inflated as required, thereby reducing rolling resistance. Together, these two innovations helped keep the forces of drag at bay, while also increasing fuel effectiveness.

Another way to increase efficiency, is to make the most of present-day available fuel options. For many fleet operators this can be achieved through the use of diesel fuels with performance-enhancing additives. In the case of the Starship truck, a downspeed axle configuration, with advanced engine controls and automated manual transmission, improved efficiency and pulling power.

‘What you put in matters’

When it comes to fuel efficiency While the hardware technologies used to design, build and operate the vehicle are the foundation of a hyper-efficient next-generation diesel truck, the success of the Starship Project also underlines the importance of what goes into the vehicle. Alongside other best practice solutions, choosing premium consumables – that are specially formulated to protect truck engines and maintain peak performance under demanding conditions – can help fleet managers meet their current performance and efficiency targets, while also setting them up for future successes. For example, the Starship truck used high-performance, low-viscosity Shell lubricants to help reduce friction in the engine. Compared to standard lubricants, these were shown to create a 2.6% benefit in fuel economy when compared to SAE 15W-40 oils, cutting fuel consumption while still providing premium protection against wear.8 Likewise, as touched on above in regards to diesel fuels with additives, what is in the tank can have a significant impact. Research has found that optimum fuel selection and management (including usage, storage and handling) can deliver fleet cost savings of up to 30%.9 Reinforcing the importance of collaborating with industry experts, this also demonstrates how efficiencies provided by available technologies can help achieve current-day targets and long-term goals. Among these solutions is Shell FuelSave Diesel with its dual detergent DYNAFLEX Technology, which is designed to help prevent the build-up of harmful carbon deposits on the injectors and remove any already present. This means the fuel can help increase both engine efficiency and fuel economy.

A more efficient fleet is possible even today

Which brings us back to Bob Sliwa, who first entertained the idea of creating a super-aerodynamic, hyper fuel-efficient Class 8 rig alongside Shell; not only because of how inefficient he thought long-haul trucks were, but because he saw the potential improvements that could be made for future success. And he believed they could be implemented right now. That is not to say every truck can be as easily well-equipped as the Starship truck. But what is clear, is that increased vehicle efficiency is attainable for today’s fleet operators and this greater efficiency can go a long way to meeting the increasingly demanding goals that the transport industry of the future will encounter, such as lowering TCO and reducing carbon footprint. To get ahead of the curve, the technologies that are available today should be viewed by fleet operators as genuine enablers for their business, with regards to performance and profitability. From choosing the most effective vehicle, fuel and lubricant technologies to capitalising on advice and collaboration with energy and technology experts, the Starship Project’s remarkable journey confirms the opportunity in front of fleet operators. An opportunity that requires them to act now to identify truck efficiency improvements, then use available technologies to capitalise on them.