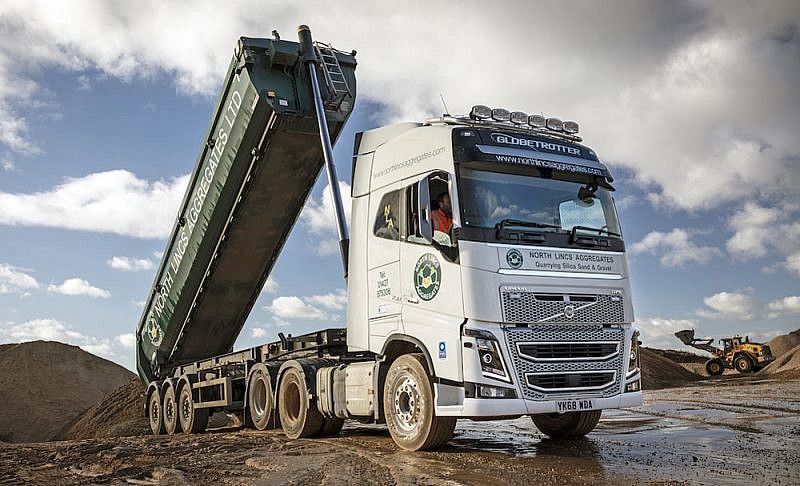 When North Lincs aggregates were looking for new trucks for its fleets, it made sure that every box was ticked on the company’s wish list

Based in the Isle of Axholme, North Lincs Aggregates, one of the biggest companies in the region for quarry products, plant machinery and contracting, has recently taken delivery of 11 new Volvo trucks – nine tractor units and two FH 8×4 tipper chassis. Key to the decision-making progress for the new vehicles was ensuring that the vehicles were strong and reliable, which led Richard Mills, director at North Lincs Aggregates, to Volvo.

“We have both Volvo trucks and Volvo construction equipment. The Volvo trucks are new and we’ve been running another manufacturer for the past few years,” explains Richard. “We like to buy our vehicles rather than renting them, then we sell them at three years old, which is what we’re doing now.”

So far, eleven Volvos have been delivered: eight FH 6×2 mid lift tractor units, two FH 8×4 rigids with Weightlifter aluminium tipping bodies and one FH16-750 6×2 tractor with a tag-axle to be used at up to 80 tonnes. The eight tractors all have the 500hp version of Volvo’s D13K engine, while the 8×4 tippers boast 540hp versions, along with Alcoa Dura-bright alloy wheels. All the trucks were arranged by Gareth Stone, area sales manager at Crossroads Truck and Bus Limited.

“We use the 8x4s for longer distance work shifting our own material, that’s why they’re a sleeper cab,” says Richard. “We opted for Volvo because we’ve always got an eye on residual values and, at the moment, they’re maintaining a much higher price after three years. We’ve gone for the bigger engine because we believe they’ll be more of an owner drivers’ vehicle when we come to sell them. The drivers also like them better because of the I-Shift gearboxes.” 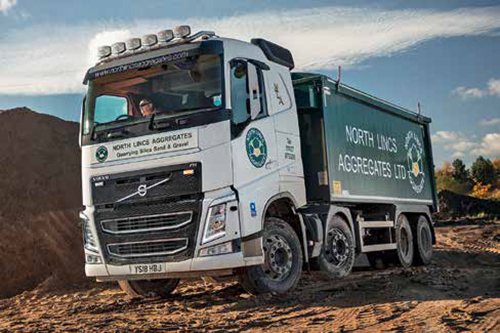 Big rig does the biz

The FH16-750 tractor unit is a bit of a reward motor. “Its driver has been with us for 20 years, so it’s really the fleet flagship,” Richard explains. With the D16K engine producing 750hp under the floor and full leather seats above, this truck is also specified with versatility in mind.

“We have a four axle low loader for moving our own plant machinery, so we bought the FH16-750 to go up to STGO2 operations at 80-tonnes,” he adds. “But 90% of the time it pulls a lighter weight tipping trailer, so we had to find a balance. Having the tag-axle keeps the weight down while also giving you a better turning circle for plant work.”

So far, the new Volvo trucks are a roaring success, especially with North Lincs’ drivers. “Put it like this, if you take a driver off his current truck and put him on a Volvo, he doesn’t want to go back,” Richard declares.

While the company prefers to do its maintenance in-house, the parts service provided by Crossroads Truck & Bus Limited makes that option easy. “The backup is excellent,” Richard confirms adding, “We’ve got eleven more Volvos on order to come next year, all are FH 540 tractor units with mid lift axles.”