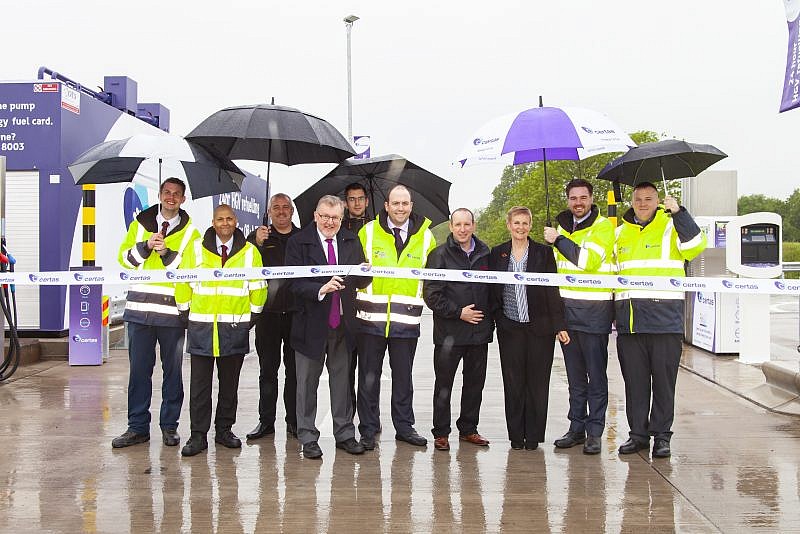 Certas Energy, the UK’s leading independent distributor of fuels and lubricants, welcomed lorry drivers and local dignitaries to the official opening of its new refuelling site at the popular ‘fechan Truckstop (Eardley International). The bunker promises increased speed and efficiency, as well as convenience for drivers.

The ribbon cutting ceremony was overseen by MP for Dumfriesshire, Clydesdale and Tweeddale, David Mundell, with several other local councillors joining HGV drivers and Certas Energy representatives at the site.

Representatives from Certas Energy were on-hand to offer advice and explain the benefits of their fuel card system to local drivers.

A truly local event, the bunker opening also saw pupils of Hoddom Primary School in Ecclefechan design road safety posters, which will be on display at the ‘fechan site to encourage drivers and pedestrians alike to be mindful on the roads.

Located at Junction 19 of the A74(M) motorway at Ecclefechan, Scotland, the new bunker features a high-speed refuelling system which dispenses fuel at speeds of up to 120 litres per minute, as well as allowing up to three HGVs to refuel simultaneously.

David Mundell MP commented: “The new refuelling facility is a great addition to Scotland’s strategic road network that will support both HGV drivers and transport businesses.

“Eardley International Truckstop is such an important fixture in this community, so it’s fantastic to see companies like Certas Energy investing in the area.”

Andrew Goodwin, National Bunker Manager for Certas Energy, said: “We are so proud to be able to officially open the ‘fechan Truckstop’s refuelling bunker. The Eardley International stop is very popular within Scotland’s driving network, so it is fantastic to be able to offer them such state-of-the-art facilities.

“Extending our coverage to all areas of the UK is important to us at Certas Energy, and the ‘fechan project has allowed us to continue to forge great relationships with drivers north of the Scottish border.”

The refuelling bunker is part of the wider regeneration of ‘fechan Truckstop. Facilities now include a truck-wash, a drivers’ rest area, a TV room, shower facilities, free WIFI and a popular diner.

For more information about Certas Energy and the network of bunkering facilities in the UK, please visit www.certasenergy.co.uk/fuel-cards-and-bunker-sites.