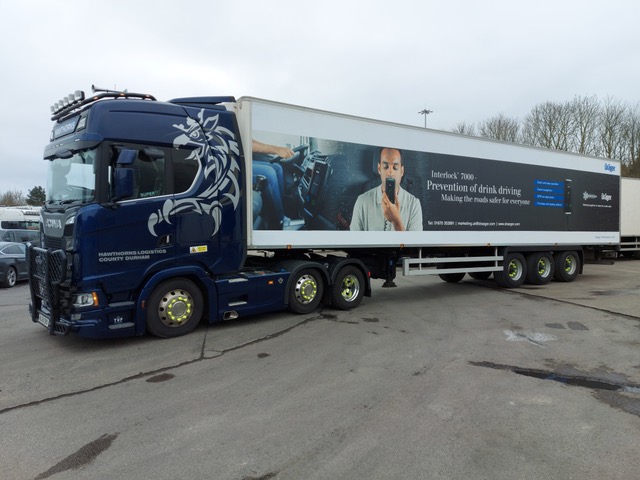 Family-run Hawthorns Logistics, which is based in Washington, North East England, takes safety very seriously. As part of their pledge to safety first, the company installed interlock devices to its 28 strong HGV fleet and has now taken this a step further by working with Draeger Safety UK to raise awareness of how fleet operators can ensure that their fleet is operating safely.

Blyth-based Draeger Safety UK is an international leader in medical and safety technology, and a market leader in alcohol detection devices. These interlock devices are installed in a vehicle and require the driver to blow into a breath-testing instrument that is connected to the vehicle ignition system. If the device detects alcohol over the limit, the vehicle will not start, therefore provide a physical barrier to drink driving.

Dave Kilsby, Company Director and son of Hawthorn’s founders commented, “We believe that having the interlock devices in place safeguards against our drivers unwittingly getting behind the wheel while under the influence of alcohol. Many people don’t realise the effects of alcohol the morning after a night out. Furthermore, our drivers often transport goods across the border in Scotland, so we have set the device to 50mg of alcohol rather than 80mg which is the drink drive limit when driving in England.

“The interlock is straightforward to install and is convenient to use so, from the driver’s perspective, the test is very quick. It doesn’t hold them up but gives them and us the reassurance that they are fit to drive which, in their case, means taking responsibility for an HGV vehicle and for our customers’ products.”

Drink driving remains a serious road safety issue in the UK. It is responsible for 13% of all road traffic deaths and is a problem which doesn’t seem to be going away. In addition, there is growing concern at the number of offences perpetrated by persistent reoffenders – one in six drink driving offences is committed by someone previously convicted. Since 2010, this amounts to over 100,000 offences – each of which puts the driver and other road users in harm’s way and is highly dangerous.

Road safety charity PACTS (Parliamentary Advisory Council on Transport Safety) has recently published a report in which concluded that this would be an effective way to reduce drink driving and have called on the Government to develop and implement an interlock programme as soon as possible.

Graham Hurst, Marketing Manager Impairment at Draeger said, “At this point, the PACTS findings are recommendations only, but the authors have strongly suggested that the Department of Transport should undertake a consultation exercise as soon as possible.

“However, the ongoing concern over repeat offenders and the growing recognition of the problem among the general public, indicates that now is the time to try a different approach and the solutions offered by interlock devices, used within a rehabilitation programme, provides an approach to tackle the problem at its roots.

“We’re delighted to be working with Hawthorns to get the message to fleet operators that they can be proactive in stopping drink driving.”

Last year Draeger carried out some research through YouGov which suggests that the PACTS recommendations are likely to be broadly welcomed by the public. Our findings showed that 82% of respondents who own a driving licence and consume alcohol support the introduction of alcolock devices for passenger transport such as buses and coaches and a similar figure (83%) would support the introduction of these devices for repeat drink drive offenders.”

Dave Kilby concluded: “Since installing the devices, there has only been one occasion when a driver had to be replaced. Overall knowing the interlock is in the vehicle means that risks aren’t taken. From our perspective as a business, it is part of offering of a first-class service both to our customers and our employees.”