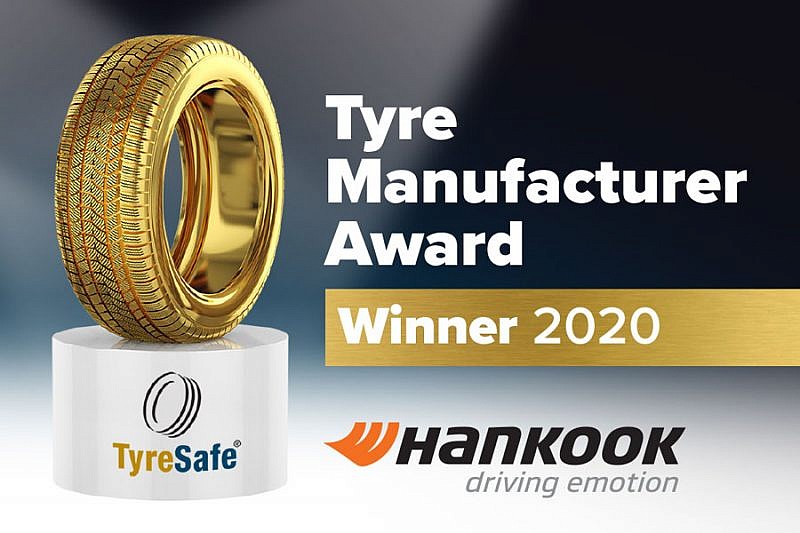 Hankook Tyre UK is once again announced as the winner of TyreSafe’s Tyre Manufacturer of the Year Award. The award recognises Hankook’s significant contribution to raising driver awareness of tyre safety-related issues. The tyre maker is commended for delivering engaging campaigns to UK drivers, informing and educating them on the importance of tyre safety and maintenance.

Premium tyre maker Hankook is announced as the winner of road safety charity Tyresafe’s Tyre Manufacturer Award 2020. The award recognises the continued contribution by Hankook to raise awareness of tyre safety over the past twelve months. Hankook was also presented with this award in 2019. Over the past twelve months Hankook UK launched three tyre safety campaigns across social channels including Facebook and YouTube. The first incorporated Tyresafe’s ‘Summer Motoring’ campaign to make drivers aware that more tyre-related incidents happen on British roads during the summer months1 than at any other time of the year, and to remind them to check their tyres before setting off on holiday.

The second campaign was activated in collaboration with a social media influencer, with video content informing drivers on topics such as how to maintain their tyres’ condition for optimum performance and control and lower fuel consumption; choosing the right tyre for the season; ensuring the correct tyre pressure and how to check their tread.

The third campaign informed and educated drivers on the function of tyre tread, pattern differences on summer, all-season and winter tyres and also why they need to prioritise their tyre safety in anticipation of the winter weather and road conditions.

Declaring Hankook Tyre UK as TyreSafe’s 2020 winner of the Tyre Manufacturer of the Year Award 2020, TyreSafe Chair and Chair of Awards Judging, Stuart Jackson said, “Hankook’s commitment to raise awareness on tyre safety resulted in a well targeted campaign, which highlighted specific messages relevant to their core age group. A good library of resources was created to support it resulting in a programme of clear and engaging content. Congratulations Hankook on being TyreSafe’s Tyre Manufacturer of the Year Award winner.”

Zoë Baldwin, Marketing Manager of Hankook Tyre UK said: “We are delighted to have won this highly coveted award for the second year running, and are thrilled to be recognised for the effort we put into sharing tyre safety messages with millions of drivers. Hankook continues to raise awareness of the importance of tyre maintenance and the dangers of defective and illegal tyres to reduce the number of tyre-related incidents on Britain’s roads.”