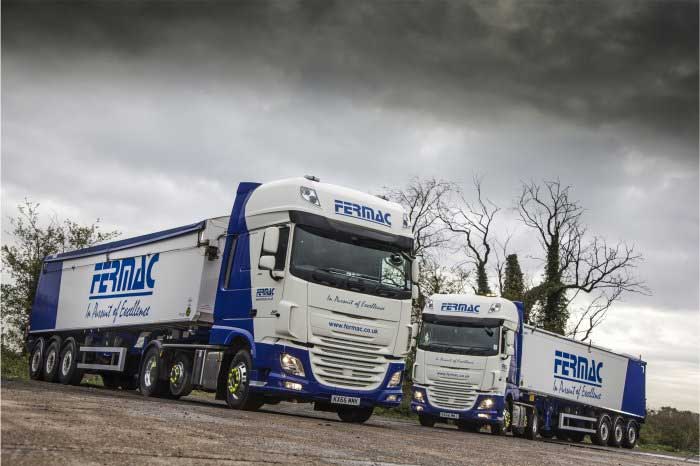 With more than a million tonnes a year of agricultural and industrial bulk tipping work already in hand, and still growing fast, Fermac has invested in its first company-owned DAF XF 460 FTP three-axle tractors. The trucks come with Super Space Cabs and form part of a small initial fleet expansion and renewal programme.

The national operator has taken the DAF XFs based on driver feed-back from a couple of leased units in the fleet. Matthew Hughes, Fermac director, said: “There are three key things we want in a truck. The first is for our drivers to be happy with our choice.

“The drivers who’d had the lease trucks wanted stay on DAFs, so we talked to the local Milton Keynes dealer, Brian Currie Ltd., who quoted us for a new XF 460. I was so impressed with the spec and the service from them at every level that I ordered three. Then I added another two to those as fleet additions, one of which runs in the livery of our local Air Ambulance, because we are major supporters of that service.

“To be honest, those additional trucks mean we now need extra drivers, but having the DAFs on the fleet and out on the road has made a real difference to recruitment, with noticeably more calls from potential drivers.” Aftersales is another of Matthew Hughes key buying factors. He had been increasingly concerned with back-up from one of his other marques, and DAF came with “a good reputation”. He said: “We liked the Brian Currie team and had excellent reports from other operators about DAF’s national dealer network. On top of that, we already knew the DAFaid roadside emergency programme was spot-on, as our two leased trucks had occasionally needed it.

“The hard fact of transport life is that trucks are mechanical, and anything mechanical is going to face a difficulty or two during its life. It’s how that gets dealt with that matters, and that made the DAF choice easy,” he said.