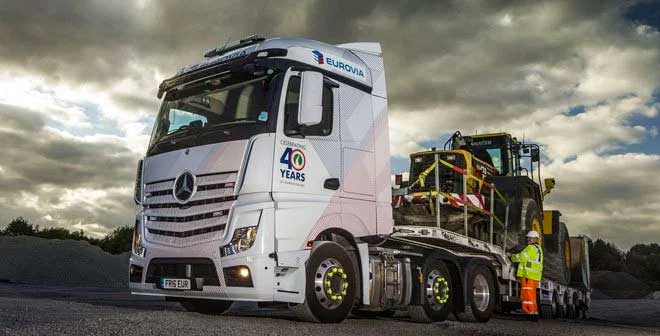 The 44-tonne rig has been specified for operation in London and the Home Counties, and is now being used by Eurovia Surfacing to transport road construction plant such as asphalt pavers, backhoe loaders and compactors to and from sites. Supplied by Dealer S & B Commercials, the 6×2 Actros 2548 has a flat-floored StreamSpace cab with factory-fitted collar and air deflector.

Its appearance is further enhanced by a colour-coded bumper and mirrors, and a roof-mounted beacon bar, while Eurovia’s smart livery highlights the company’s four decades in business.

The safety of cyclists, pedestrians, and other road users, as well as its own employees, was at the top of Eurovia’s agenda and the trailer has been specified to reflect the fact that many deliveries and collections of plant are made in darkness. Features include a new LED lighting system which is built into the shackle wells and illuminates the entire trailer, and a fall arrest system on the neck. The combination is also equipped with a side scan and four-way recordable camera system that meets the FORS (Freight Operator Recognition Scheme) Gold standard.

It is the first ‘semi-slope’ trailer designed and built by Market Harborough-based King Vehicle Engineering to make the job of loading and unloading heavy plant, and particularly rollers which are usually winched onto the bed, easier and safer for operatives.

Eurovia Transport & Plant Operations Manager Chris Dixon said: “Mercedes- Benz is a well-established supplier to our business and the fleet includes a number of Actros, among them three of the four units that pull our low-loaders.