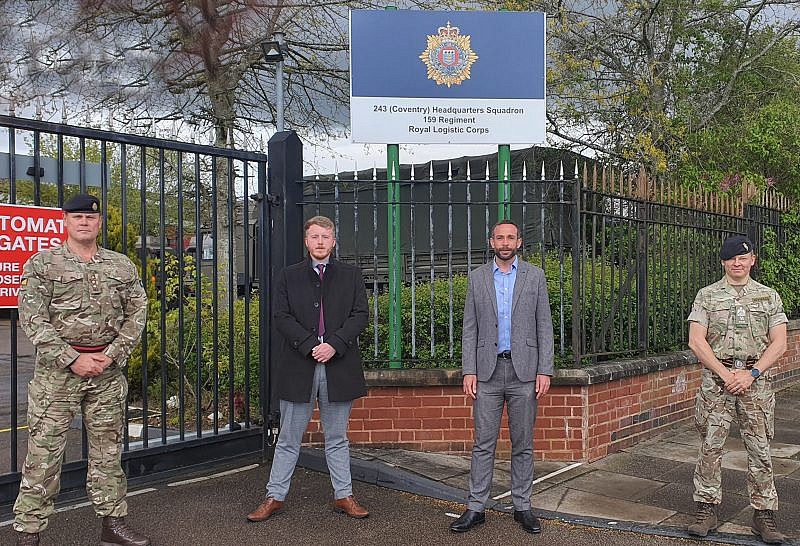 Leading and award-winning Midlands recruitment agency Encore Personnel, which supplies more than 3,500 temporary staff each week, has signed a pact with the Armed Forces which enshrines its commitment to supporting ex-service men and women in finding work and thriving in the workplace.

Encore, which has 10 branches across the region, including its head office in Leiceste, employs more than 200 staff and specialises in warehousing, manufacturing, logistics, driving and engineering recruitment.

The business, which has a projected turnover of £100m, has worked around the clock during the pandemic to support vital supply chains and essential services – and now it has decided to further cement its commitment to ethical and exemplary recruitment practices by signing the Armed Forces Covenant, an agreement which states that a business will do all it can to ensure ex-military do not face discrimination.

Inspired by the suggestion of James Simpson, who joined Encore in 2020 after serving 5 years with the 26 Regiment Royal Artillery, 159 Battery (Gutersloh, Germany) and 132 Battery (Newcastle), Encore’s commitment to supporting ex-service men and women is both an internal and external pledge.

James, who is a Business Development Consultant in Encore’s Driving division, said: “As soon as I was settled at Encore, I knew it was a business that really cared about its employees, their wellbeing and future prospects. Having served in the forces, I know first-hand how it feels to step out of the routine of military life into the working world. It can be unwelcoming and daunting for some. Encore’s senior team have done everything they can to make my transition into civilian work-life enjoyable and rewarding.

“So, I pitched the idea of signing the Armed Forces Covenant to the Board of Directors and they were all in positive unison – it was signed straight away. It basically means that we will do our utmost as a business to give a fair shot to people who’ve left the forces, be that as candidates for our customers or new recruits to our own teams.”

James added that there was likely to be a large uplift in the number of ex-military looking for work in the coming years as the army scales back its numbers as a result of the recent Defence Review – so now more than ever before it is important that other businesses follow suit.

He added: “I was astounded to learn that less than 0.5% of all registered recruitment businesses in the UK have signed the Covenant. It would be fantastic to see more agencies follow our lead.”

Area Manager responsible for Encore’s Logistics Division, Andrew Fletcher, added that James was a real asset to his team and his passion for equality for those who have served the country in the forces was commendable.

He said: “James joined our division with a raft of transferable skills which are clearly a reflection of his training and experience in the military. He’s reactive, reliable and relentless in following a lead – all of which are key core abilities in recruitment. It’s a pleasure to have him on board and thriving as part of the Encore family.”

Managing Director at Encore Pete Taylor added: “We’re honoured to be supporting armed forces leavers and their families by signing this Covenant. It really was a no-brainer for us, a simple and very effective way of both showing gratitude to ex-service men and women for the sacrifices they have made for our country and our collective safety, as well as furthering our commitment to equal opportunities and a level playing field for all candidates and our own teams.”