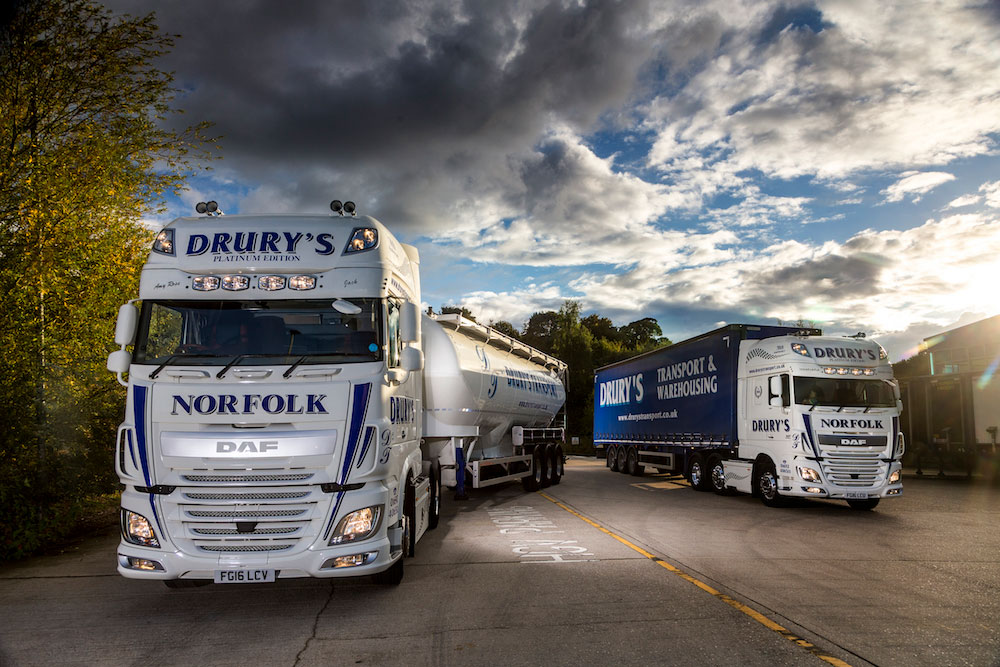 Richard Harris, a former aircraft engineer with the RAF and owner-driver, and now operations director for the busy East Anglian haulier, said: “We were looking for some new vehicles and this seemed like a great way to do it. We have had a mixture of marques over recent years, always with a strong DAF presence, so we decided to combine getting two really strong performers for our anniversary celebrations. They replaced two 10-year-old DAFs with over 2.4 million kms between them. They look tremendous,” he said, “and the drivers love the comfort of the cabs and the power in the big PACCAR engines. That comes in very handy when you’re loaded up with wet, muddy spuds straight out of the field.”

Harris recognises the importance of the manufacturer’s dealer in his choice. Based in Norwich near one of the company’s bases, Ford & Slater has impressed him in the five years he has been with Drury’s. “I like DAFs anyway, having bought my own new 480 XF back in 2001, but when you get a dealer like Ford & Slater which clearly cares about customers and is prepared to help, then that just seals the deal for me. This dealer is always prepared to go the extra mile and help us out if we need anything, and they have gone out of their way to get to know us and what we need from them,” said Harris. The new vehicles have also given Richard Harris an important opportunity to study the company’s latest venture, which saw it develop its own workshop activity into an independent business operation, in which a new MOT lane is due for completion very shortly. He has decided to take only one of the new DAFs on full R&M from the manufacturer, leaving the other to be maintained in Drury’s own service facility.