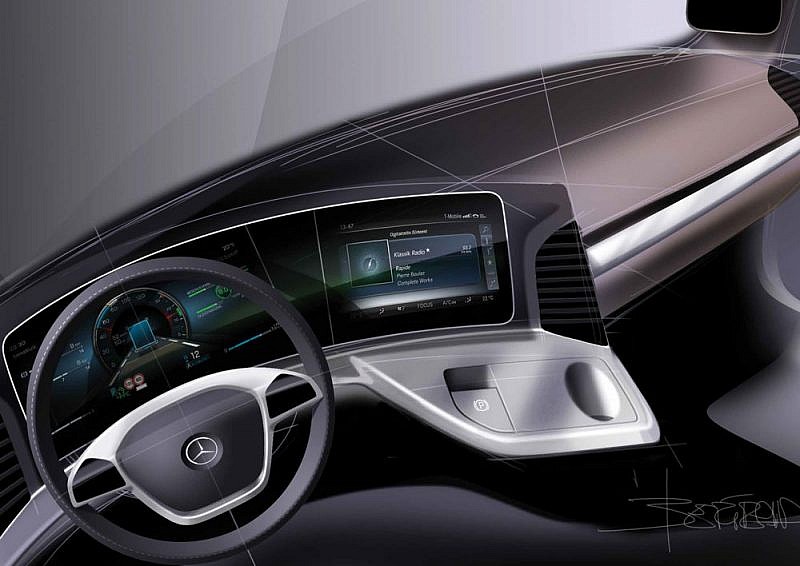 Mercedes-Benz has designs on tomorrow’s truck dashboards. Brian Weatherley has been to Germany to learn that it’s all about the ‘User Interface’ – and delivering vital driver information

Before we go any further, when you look at your truck dashboard what do you like to see? Big, ‘old-school’, analogue dials with needles? Or maybe you’re a new generation, social-media savvy driver raised on the internet and video gaming, who’s more at home with touch-screen technology and animated computer graphics? If you’re in the latter group, we’ve got good news for you. At a recent Mercedes-Benz ‘FutureLab’ symposium, held at the manufacturer’s massive Wörth assembly plant, a fortunate group were glimpse of the truck dashboard of the future. And believe us, it will be right-up your street…in more ways than you might imagine… 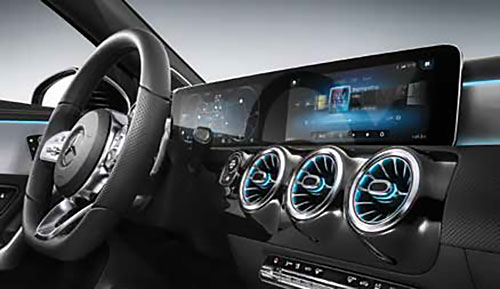 Among all the crystal ball-gazing, which included autonomous trucks and battery powered vehicles, we were hooked by a fascinating workshop entitled ‘Design inside out’ which looked at what a future ‘User interface’ (i.e. dashboard) might look like. Above-all-else it also confirmed our thoughts that the creators of tomorrow’s UI are just as likely to come from the burgeoning world of computer animation and video gaming, as traditional centres of automotive design.

So how do you go about creating the dashboard of the future? Alexander Graf from Mercedes’s department of ‘Digital Graphic Design Realisation’ explains that first Merc’s designers create a draft sketch of the proposed dashboard, based on what needs to be shown – like legal requirements and so on – as well as the basic specification and positioning of each information element. Next, using Photoshop, that preliminary sketch is turned into a 2D picture. However, as 2D pictures aren’t particularly flexible from a designer’s perspective it’s quickly turned into a more dynamic 3D ‘on-screen’ version. This is where the computer animators come in, for in terms of what a 3D display can show the possibilities are amazing, as Graf confirms: “In 3D it’s very flexible what you can see; regardless of the size of the screen or the aspect ratio.”

To prove that point, Graf showed us an attractive futuristic dash display in which two digital dials (actually ‘quadrants’) consisting of a normal rev-counter and a speedo sat on each side of the screen, while the central area was taken up by a ‘rolling’ animated view of the road ahead that disappeared into an artificial horizon. Just like a sat-nav screen the animated central 3D roadscape graphically replicates the road ahead but with some clever additions. For example, it can simulate a vehicle passing alongside the truck, gradually appearing from the bottom of the screen before accelerating away towards the horizon. Such a feature could be useful within a blind-spot detection system, alerting a driver to the proximity of other road-users. 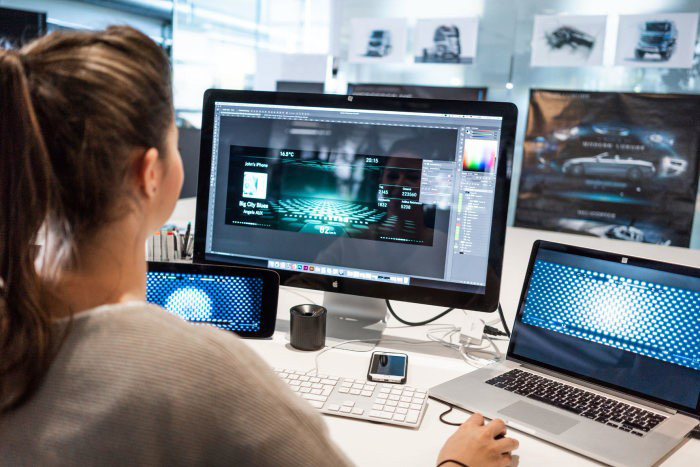 Another animation opportunity could be a traffic-sign ‘recognition ‘assist’, whereby an approaching warning sign (e.g. for a reduced speed limit) is flagged-up to the driver in the animated roadscape as the truck approaches it. However, the highlighted-sign then remains on the screen, even after the truck has driven past the real thing, so it can’t be ignored by the driver, or forgotten.

As well as building intelligence into a future digital dash you could add emotion too. A ‘calming’ graduated blue tint on the artificial horizon suggests to the driver there’s nothing nasty up-ahead. But change that background tint to red and it immediately flags-up an approaching hazard. Once passed, the blue background returns, allowing the driver to relax again, while still remaining alert. However, Graf maintains it’s important not to overload the driver with signals. “We don’t want to have too much distraction.”

Other ideas for a future dash include the use of a single, easy-to-reach touch-screen, either built-into the dash or as a removable work-pad with a docking-station, capable of handling various operating functions. The single combined digital dash and touch One-piece digital dash and touch-screen in latest A-Class car provides a hint as to what might appear in a future Mercedes van or truck cab The time to convert an initial 2-D sketch for a dashboard into a working digital rendition is surprisingly short screen on the latest Mercedes A-Class is a strong hint as to what might work in the German manufacturer’s trucks and vans over the coming decades. Alternatively, the UI might feature a screen that only needs to be looked at it, or a head-up display with information projected onto the windscreen could be another option. 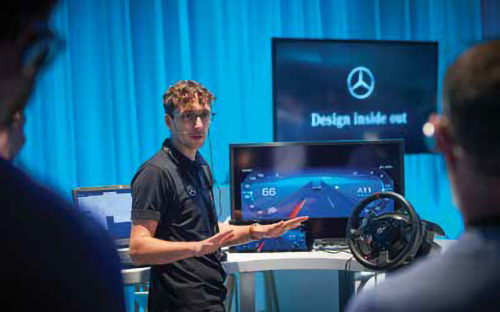 Co-presenting the workshop was Kai Sieber, Mercedes Benz’s director of design brands and operations, who told us that “Personalisation also plays a vital role. We understand [that] the availability of the vehicle is decisive – only a truck that’s on the- road is earning money – so for us it’s important that every Mercedes truck driver has a Mercedes ID. With this ID we can personalise the settings so no time is wasted setting-up the screen and its contents – it will be automatically uploaded with the driver’s ID. Basically, what we will offer is a digital assistant that takes over many tedious work functions from the driver’s work-load – that’s the additional value of what we’re offering.” A digital dash of the kind shown at FutureLab can be produced in a surprisingly short time says Graf: “90% doesn’t take too long to develop. We’ve got good designers, good concepts, and depending on the complexity, it could be as little as two weeks up to three months to have a really beautiful design.” However, it’s that final 10% which includes making sure the design works on all parts of the screen including the edges and corners that takes longer. “All of these elements need to be considered,” he says. “That’s when we’re talking about complexity.”

So when will you see a dashboard with the kind of User Interface presented at FutureLab? Sieber reckons that around 2030- 2035 is the perspective for the workshop. That’s still some time away, but regardless of what a future Mercedes truck or van dashboard might look like, or how drivers will use it, Graf says reassuringly that they’ll always have all the information they need, whenever they need it.