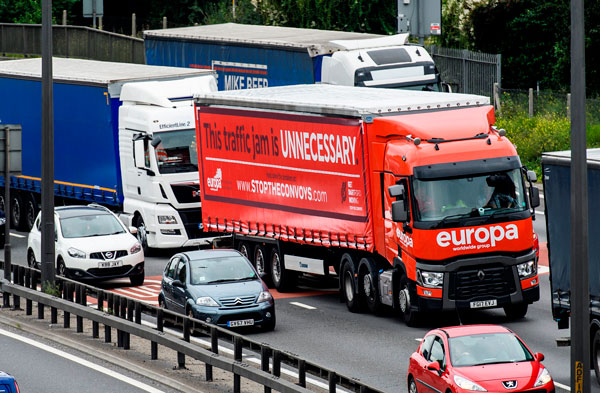 Dartford-based independent logistics operator Europa Worldwide Group’s campaign to tackle the traffic jams at the Dartford Crossing has seen thousands of people from across the UK sign its petition, with signatures almost at the 2,000 mark. The campaign has also sparked debate within the industry – with industry bodies and fellow operators voicing concerns about Europa MD, Andrew Baxter’s proposal to reroute oversized and hazardous goods vehicles the other way around the M25, in a bid to ease the ever-worsening congestion at the Dartford M25 flashpoint.

The Dartford Crossing (which is close to Europa’s £30m 1hub headquarters) is a notoriously busy route that is brought to a standstill on a daily basis, because every time an oversized or hazardous goods vehicle enters the tunnel it needs to be escorted in a convoy – which means all other traffic has to stop.

Andrew says he’s pleased to have drawn attention to the issue and despite mixed response from the haulage sector maintains that redirecting the convoys could yield the quickest result, but welcomes alternative suggestions.

Andrew said: “If nothing else we set out to spark a debate about this and raise awareness of the issue – which we’ve achieved – and we’ve seen that the congestion at the crossing is a hot topic for many people. We’re a transport company and we do operate hazardous goods vehicles ourselves – we have no interest in harming our industry. Ultimately though it boils down to what is better for the 99 per cent of motorists using the crossing and the huge inconvenience they suffer because of the other 1 per cent. Waiting another eight years for the Government’s solution doesn’t benefit the majority of road users in the meantime.” Banning oversized and hazardous goods vehicles from using the route could potentially remove up to 2.5 hours of traffic jams at Dartford each day.

“We’ve received a steady stream of support – and a lot of signatures – to date for the campaign but we do understand some of the frustrations being raised by transport businesses about the potential cost implications of time and fuel, particularly those whose destination is just north of the crossing. But I want to make it clear – we are not hell-bent on our idea – we are just happy to have started the discussion and are completely open to other constructive suggestions about how the convoy process can be managed more efficiently. In fact, we’ve had some really interesting suggestions in the first week – limiting the convoys to crossing at night, for example.”