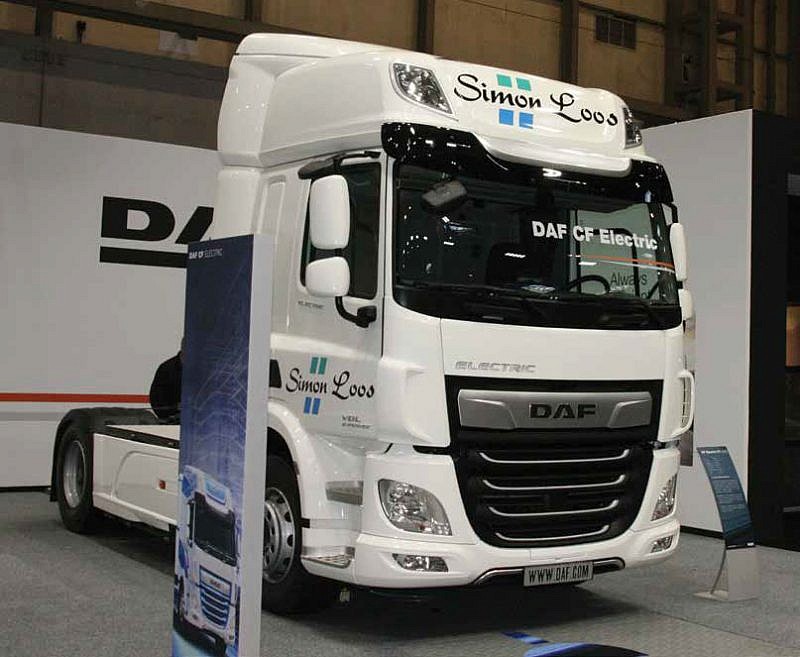 Truck drivers of the future will need to get used to vehicles running on fuels other than diesel rather sooner than they might have expected.

Not for the first time, alternative fuels were a theme at this year’s Commercial Vehicle Show – but this time they gave some appearance of actually being viable.
Yes, we’ve heard it all before. We’ve had gas trucks that wouldn’t start, dual-fuel trucks that produced more pollution than straight diesel ones, and battery-electric trucks with a useful range so short that they probably would have been able to travel further plugged into the mains on a long extension. Most of the companies that made them are long out of business for reasons that were painfully obvious to anyone who actually had to drive them. 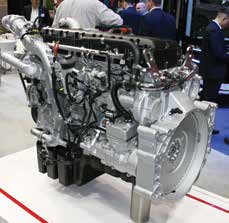 But both the (only two!) mainstream truck manufacturers at the show had an all-electric truck on display. DAF the CF Electric tractor that is currently working on trials with a supermarket distribution network in Holland, and MAN the 15-tonne CitE, ‘concept’ truck which is actually fully-functional. Both manufacturers have leaned heavily on proven electric bus technology to produce drivelines which, in the case of the DAF, are capable of a 100 km operating range and a 30 minute fast recharge. MAN has more conventional-looking 26-tonne electric trucks running on trials in Germany and Austria, too.
But diesel isn’t out of the equation yet: MAN launched the new D15 straight-six: it’s a 9-litre SCR-only engine, a direct replacement for the D20 and saves 230 kg compared to its predecessor. Ratings of 325 hp 355 hp, and 395 hp are offered with peak torques of 1,600, 1,700 and 1,800 Nm respectively. A single turbo is fitted to all engines: the two lower output versions with wastegates and the 395 hp a variable-geometry unit. 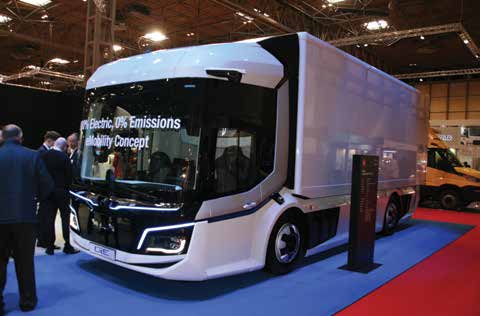 MAN also showed a new ‘driver-friendly” version of the TGX tractor: the XLion. It features various styling and comfort features including in-cab fridge, roller blinds and a custom sound system, and similar packages are also available on distribution and construction models as well as the long-haul tractor.
Staying with compression ignition, DAF is also heavily promoting a ‘pour-in’ alternative to diesel: HVO. This is made from foodwaste and burns cleaner and produces less CO2 than conventional diesel, without any of the woes associated with biodiesel. Many modern trucks, including all Euro V and VI DAFs, can run on HVO without any modification.
Also on show from DAF were new chassis options including a tridem 8×4 with unpowered rear-steer axle, and an 8×2 with twin-steer front and rear-steer axles.
DAF customers buying new XF or CF trucks will also get the benefit of a voucher-based training and handover session to ensure that drivers know how to get the best from their trucks. 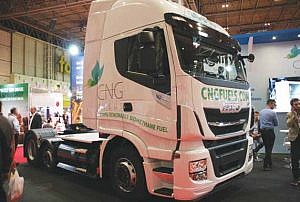 With an all-new heavy truck launch imminent, Iveco was absent from the show this year: however, a vehicle based on the manufacturer’s gas-powered Stralis turned a few heads. Iveco’s current 6×2 gas tractor is powered by liquid natural gas (LNG): it offers both compressed natural gas (CNG) and LNG as alternative fuel options: however, the low density of the compressed gas means it is a practical option only on rigids and 4×2 tractors. With the high-volume tanks fitted to a 4×2 tractor, Iveco can only claim a range of 570 km on CNG. Now. a partnership between Agility Fuel Solutions and biogas provider CNG Fuels created what’s claimed to be a viable 6×2 CNG tractor unit suitable for UK 44-tonne operations.
Launched at the CV Show, the CNG tractor is based on the standard Iveco Stralis NP460 CNG 4×2 RHD tractor, with a lengthened chassis and a 17.5in mid-lift axle from Italian chassis converter System Truck to maximise tank space. It’s fitted with two 365-litre gas tanks, giving a 560 km range: comparable to what’s achieved by a 4×2, but allowing 44-tonne operation. This can be extended by 1120 km by adding five CNG cylinders under the trailer.
The tanks’ strong composite construction allows gas to be pumped in to pressures of up to 250 bar: the Iveco’s standard tanks have a 200 bar limit.