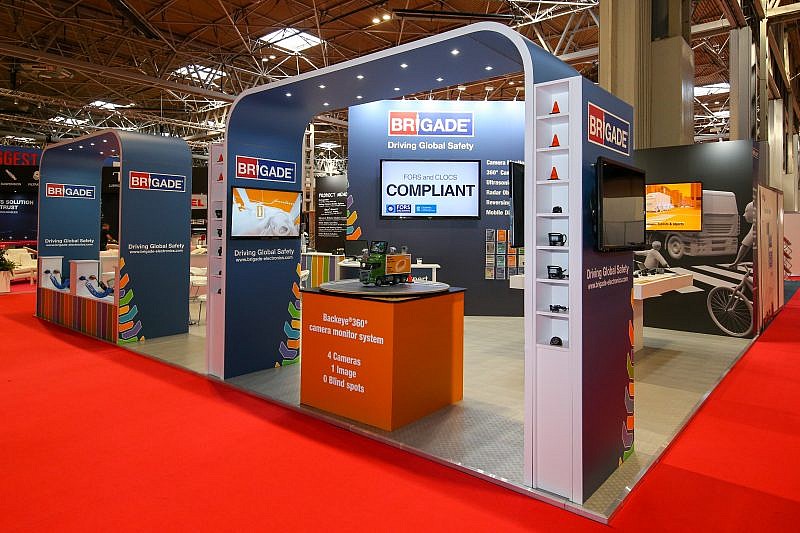 Brigade Electronics is delighted to announce that it will be returning to the Commercial Vehicle Show – Britain’s biggest road transport event – at the NEC Birmingham between 24th and 26th May 2022 following a two-year break.

Located at stand 4F15, Brigade will be showcasing Sidescan®Predict – its next generation of collision avoidance systems. The system uses artificial intelligence to constantly gather object detection data, such as the speed and distance of a cyclist or other vulnerable road user from a vehicle.

With the consultation for updates to the London’s Direct Vision Standard opening in October 2022, Emily Hardy, Marketing Manager of Brigade UK, believes that technology like Sidescan®Predict is very likely to be included. She said:

“TfL always wanted a system that could be on continuously. However, this causes an issue with potential driver distractions because the existing technology was only designed for low-speed manoeuvring. However, with Sidescan®Predict the collision protection is active with or without the indicators on.”

The introduction of the Highway Code Hierarchy, meaning that HGVs will now bear the burden of responsibility in the event of an incident, is also making fleet operators think more carefully about how they can enhance vehicle safety. Emily said:

“Even if you are not driving in Greater London, the approved solutions for the Direct Vision Standard, along with other industry accreditations, such as FORS, CLOCS and Van Excellence, are ideal templates for mitigating the risks of collisions.”

Brigade will be joined on its stand by Logistics UK to raise awareness of the updates to the Van Excellence Scheme, which requires all new vans entering fleets to be fitted with safety equipment, such as reversing alarms, sensors and cameras.

Brigade, which is Logistics UK’s Van Gold partner, will also be celebrating the launch of Brigade VAN – its range of vehicle safety devices tailored specifically for the van market. As part of the Van Excellence Audit requirements, Brigade has created a risk

assessment to help van operators assess which vehicle safety equipment will be most suitable for their needs.

Alongside this, Brigade will be unveiling the latest addition to its MDR 600 series of vehicle CCTV digital video recorders (DVR), the MDR 644, and its new Backeye®360 HD BN360-300 and highlighting its fully managed Cloud connectivity service, BRIDGE, which can now be linked to its full range of MDRs.